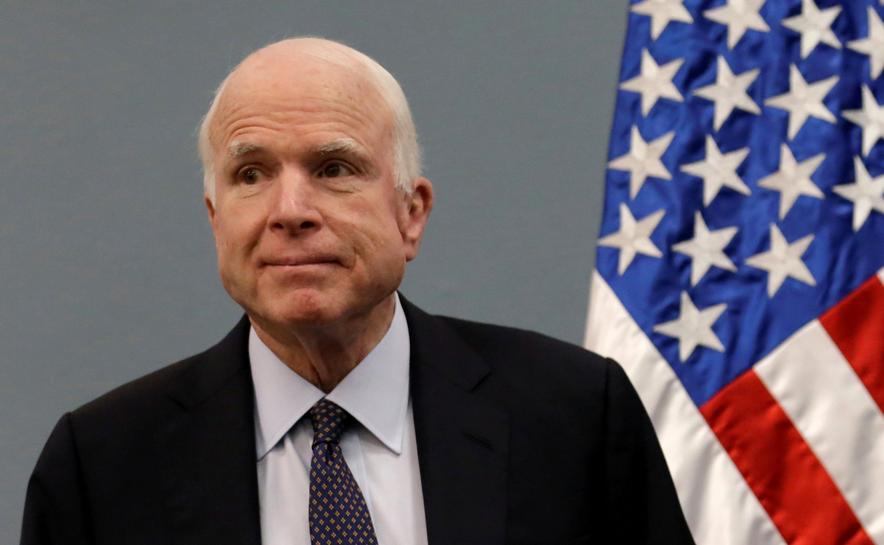 
WASHINGTON (Reuters) – U.S. Senator John McCain on Thursday vowed a quick return to Washington despite his newly diagnosed brain cancer in a show of the fighting spirit that has come to define the war hero and which prompted a wave of support across the political spectrum.

The 80-year-old outspoken former Republican presidential candidate had surgery last week for a blood clot above his left eye. His office said late on Wednesday that the procedure revealed an aggressive form of brain tumor known as a glioblastoma.

“I greatly appreciate the outpouring of support – unfortunately for my sparring partners in Congress, I’ll be back soon, so stand-by!” McCain wrote on Twitter shortly before issuing a news release through his office related to Syria.

From his home in Arizona, McCain was working the telephones to stay on top of the hottest issues being debated in Congress.

Graham said McCain wanted to discuss healthcare legislation that is at the center of the Senate’s attention, and a sprawling defense bill McCain would usher through the Senate as chairman of the chamber’s Armed Services Committee.

Graham told reporters McCain admonished him, “‘No more woe is me.’ He is yelling at me to buck up. I’m going to buck up.”

The son and grandson of admirals, McCain survived more than five years of captivity as a Navy pilot during the Vietnam War. He has defined his political career as a fierce advocate for the U.S. military but also as a lawmaker with an independent streak willing to work with Democrats.

Senator Dick Durbin of Illinois, the No. 2 Senate Democrat, said the flood of “bipartisan respect and love for John McCain as he faces this cancer battle reminds us that, after all the meanness, there is a human side to politicians. Count this Democrat in John McCain’s corner.”

McCain ran a failed race for the White House in 2008 against Obama, and last year won a sixth six-year term in the U.S. Senate.

Glioblastoma multiforme is the most common and most deadly form of brain and nervous system tumor, typically killing half its victims within a year. Patients rarely survive more than three years.

It is the same type of tumor that killed Democratic Senator Edward Kennedy in 2009 and former U.S. Vice President Joe Biden’s son Beau in 2015.

McCain’s doctors said he was recovering from surgery well, and praised his underlying health as excellent. His doctors told CNN on Wednesday that he had no sign of neurological impairment before or during his surgery.

Treatment options include a combination of chemotherapy and radiation.

McCain’s illness has potential policy implications for healthcare legislation and other agenda items in Washington.

Republicans hold a narrow 52-48 seat majority in the Senate, and McCain’s absence has made it more difficult to gather the 50 votes needed to advance a healthcare bill under special, expedited procedures.

He has been recovering at home in Arizona since undergoing his initial surgery at the Mayo Clinic in Phoenix last week. It was not immediately clear when he would return to Washington.

“Further consultations with Senator McCain’s Mayo Clinic care team will indicate when he will return to the United States Senate,” McCain’s office said in its statement.

The senator was re-elected in November to represent the Southwestern state. Arizona is the birthplace of former Senator and 1964 presidential candidate Barry Goldwater, who some call the father of the Republican conservative movement.

If McCain were to retire or die before his term is up in January 2023, Arizona’s Republican governor would pick a Republican replacement, who would serve until a special election in November 2018. Whoever is elected would fill out McCain’s term.

Arizona’s other senator, Republican Jeff Flake, is up for re-election next year.

McCain has had non-invasive melanomas removed at least three times. Decades earlier, he overcame injuries suffered at the hands of his North Vietnamese captors.

Republican Senator John Thune of South Dakota on Thursday called McCain a hero to many, and expressed optimism about his newest fight.

“He’s a warrior. … I’ve seen him work guys half his age into the ground. He’s a remarkable individual,” Thune said on CBS News’ “CBS This Morning” program.

Children with COVID-19 may have lower infectivity than adults, UK scientists say
NASCAR back on track as F1 and IndyCar stuck in virtual world
13 project teams from UWC schools and the African Leadership Academy will be taking part in the 2020 Young Aurora
Gagik Khachatryan was deprived of the constitutional right to healthcare. A report was filed about the crime
Collision of galaxies may have spurred our solar system's formation