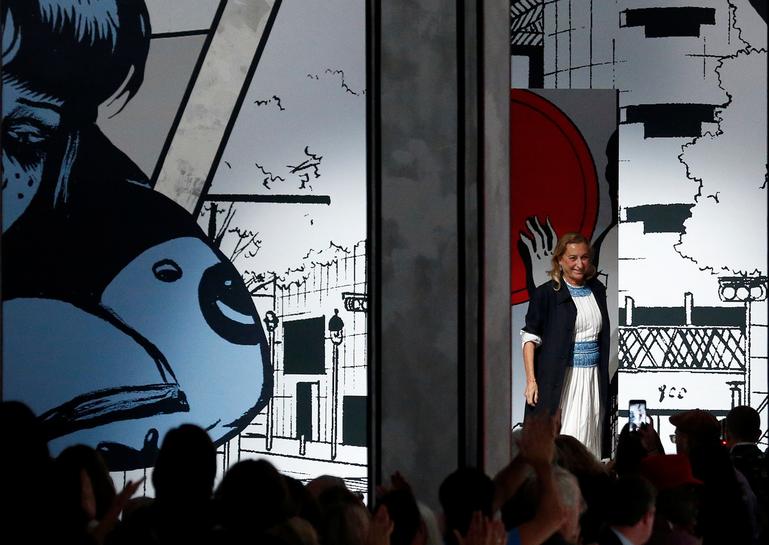 
MILAN (Reuters) – Prada’s chief executive and creative director Miuccia Prada said on Thursday she did not want to be judged by sales but that her designs offered ideas to women of how to be strong and combative.

“I don’t want to be judged by sales, this is my love … my life and my job (are) more important,” Prada told reporters at the end of the show highlighting her spring-summer 2018 collection.

The Italian fashion house this month reported a sharp drop in profits and a 5.5 percent fall in revenues in the first half of the year, saying it would take longer than expected to complete an ongoing revival of the company.

The Milan-based but Hong-Kong listed luxury group on Thursday showcased dark colors and looks dominated by sleeveless and long double-breasted male jackets. Femininity was there too, with striped blouses, damasqued fabrics and kitten-heeled shoes.

The highly-respected designer said she was “a bit angry” about women’s condition in society and that women should be stronger in order to improve their role and “go further”.

“More than rebellion it’s about women being strong. There is still so much against us so we need a lot of cleverness, intelligence and strength,” she said.

NASA human spaceflight chief resigns ahead of launch
The negative impact of government policy on investment. Sargis Grigoryan
Children with COVID-19 may have lower infectivity than adults, UK scientists say
For first time, scientists spot an alien planet as it is being formed
Coronavirus vaccine safe in early trial, hydroxychloroquine may increase death risk