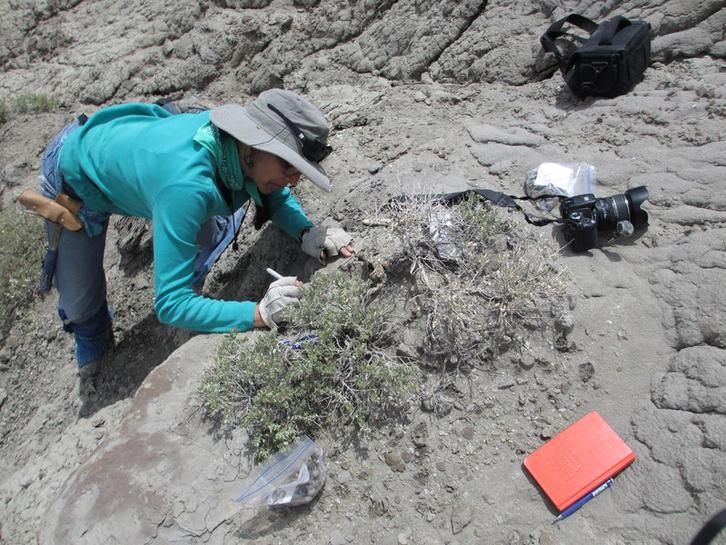 
WASHINGTON (Reuters) – Some plant-eating dinosaurs apparently liked a side order of crabs to go with their usual salad.

Scientists said on Thursday fossilized dung thought to have come from herbivorous duck-billed dinosaurs that inhabited southern Utah 75 million years ago contained pieces of crustacean shells along with vestiges of vegetation.

The discovery provides the strongest evidence to date that some large herbivorous dinosaurs sometimes strayed from a purely vegetarian diet, said University of Colorado paleontologist Karen Chin, who led the research published in the journal Scientific Reports.

“This was a very exciting discovery, precisely because it was so unexpected,” Chin said.

Fossilized dung, called coprolites, offers insight into the diet of extinct creatures that cannot be gleaned by merely studying teeth, jaws and skeletons.

Ten coprolites from Utah’s Grand Staircase-Escalante National Monument contained crustacean shells mixed with rotted coniferous wood. For at least part of the year these duck-billed dinosaurs may have munched on rotting logs because they contained stores of crustaceans and other invertebrates, Chin said.

Field Museum scientists Pete Makovicky (L), Associate Curator of Dinosaurs, and Bill Simpson, Head of Geological Collections, use a cast of one of the T. rex SUE’s gastralia — a set of bones that look like an additional set of ribs — to show where they will be positioned on her skeleton in Chicago, Illinois, U.S. in this undated handout photo obtained by Reuters August 29, 2017. Zachary James Johnston/The Field Museum/Handout via REUTERS

Chin said the researchers do not know precisely what types of crustaceans were eaten by the dinosaurs, but it was possible they were crabs. A variety of crustaceans also including crayfish and pillbugs are known to shelter in the moist environments of rotting logs. The crustaceans were at least two inches (5 cm) long.

“Rotting wood and fungal tissues would have offered useful nutritional compounds such as cellulose and fiber, and the crustaceans would have provided good sources of protein and calcium. Protein is an important component of animal diets, and is particularly important when animals are breeding,” Chin said.

The size of two dinosaurs, the Argentine titanosaur Patagotitan mayorum and the North American predator Tyrannosaurus rex are compared with a human figure for scale, in this handout illustration obtained by Reuters August 29, 2017. The Field Museum/Handout via REUTERS

The researchers think eating crustaceans may have been a seasonal dietary change linked to breeding and egg-laying. Some birds, the evolutionary descendants of dinosaurs, consume more protein and calcium during breeding season.

Duck-billed dinosaurs, also called hadrosaurs, earned their name because the front of their skull resembles a duck’s bill. They also possessed beaks and specialized teeth for grinding plant material, and are believed to have roamed the landscape in herds.

Hadrosaurs were common in western North America and other parts of the world during the Cretaceous Period, representing an important plant-eating group alongside armored dinosaurs and horned dinosaurs.

Reporting by Will Dunham; Editing by Sandra Maler

Armenia Was Right: Co-chairs Supported Mammedyarov
The online program “Step Towards Home” has launched
Judge Vahe Grigoryan: This Is a Brave and Historic Step
International competition for the development of Gyumri Friendship Park architectural solutions kicks off in Armenia
Nobody Has Recorded that My Tenure Ended: Judge Gyulumyan