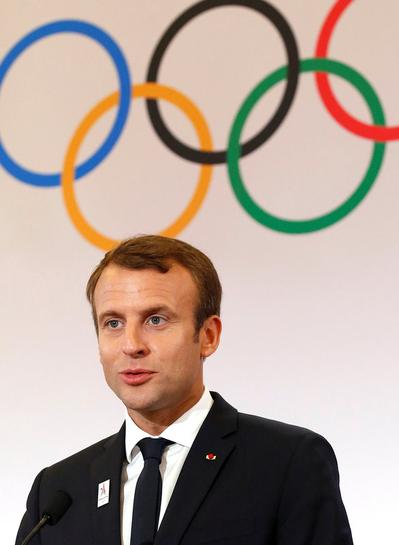 
PARIS (Reuters) – President Emmanuel Macron on Thursday promised a 2024 Olympic Games that transform French sport and praised the International Olympic Committee’s decision to keep the dreams of two cities alive by announcing the 2024 and 2028 Games at the same time.

That decision followed the withdrawal of four of the six cities bidding for the 2024 Olympics amid concerns about the size, cost and complexity of organizing the world’s biggest multi-sports event.

Los Angeles then dropped its bid for the 2024 Olympics, for which it had been campaigning for over two years, in return for receiving the 2028 edition. This paved the way for Paris as the sole 2024 bidder to win those Games unopposed.

“Thank you first for your expertise in translating the Olympic spirit into action by combining the two ambitions of the Paris 2024 candidacy and the Los Angeles 2028 candidacy,” Macron said on a visit to the French Mediterranean port city of Marseille with IOC President Thomas Bach.

”It required a lot of intelligence to do so and you did it.”

He added, “These 2024 Games will be the Games of all of France and all the French people, and the ambition of these Games will comply with the values that were presented to you: sustainable development, inclusiveness and transformation of sports in France.”

Marseille will host Olympics sailing events and some football matches.

Macron and Bach joined members of the French sailing team on a tour of the Marseille Marina, where more than 15,000 people will be able to watch sailing during the 2024 Games.