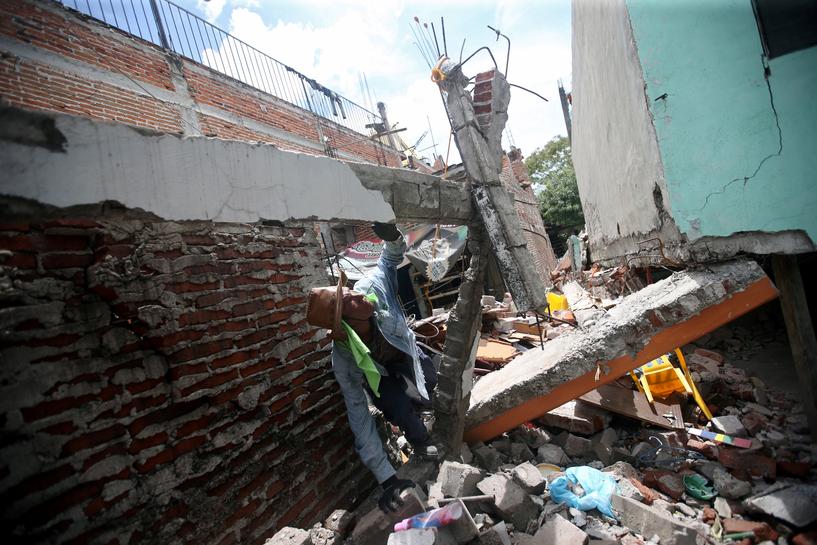 
MEXICO CITY (Reuters) – Rescuers swarmed over rubble with shovels and picks on Thursday in a frantic search for survivors two days after Mexico’s deadliest earthquake in a generation, focusing on 10 collapsed buildings where people may still be alive.

Those trapped included five Taiwanese workers in a textile factory in downtown Mexico City. But the Navy said a missing schoolgirl whose fate captured the nation “did not exist,” leading to an outpouring of anger over the mix-up.

The death toll was at least 273, officials said. Mexico City Mayor Miguel Angel Mancera said 50 people were not accounted for.

Working without pause since Tuesday afternoon’s 7.1-magnitude quake, first responders and volunteers have saved 60 survivors from central Mexico City to poor neighborhoods far to the south.

Late on Wednesday night, an eight-year-old girl was rescued from a collapsed building in the Tlalpan neighborhood, nearly 36 hours after the quake, local officials said.

Luis Manuel Carrillo Núñez, 14, said he was in a yoga class at the Enrique Rebsamen private school on Tuesday when he heard people yell, “It’s shaking!”

He ran to escape the building as it began collapsing. But some classmates never made it out.

“It’s hard to know that you’re not going to see again the friends that you loved. I’m really traumatized,” he said.

The full scale of damage has not been calculated, with buildings across the city of 20 million people badly cracked. Citigroup’s Mexican unit CitiBanamex told clients it was shaving 0.1 percentage point off its 2017 growth forecast to 1.9 percent due to the earthquake. (For graphic, click tmsnrt.rs/2xxlUTz)

Some families made dangerous trips back into damaged structures to pull out possessions, and trucks with mattresses, furniture and televisions rumbled through the streets.

Despite a massive effort by volunteers and the armed forces to gather and distribute food and basic medicines, help has not reached everybody.

Thousands of people were sleeping in their cars, rather than going to shelters or damaged homes, and in the badly damaged streets in the south of the city some people held up signs begging for food.

While food, water, medicine, blankets and other basic items have been donated, some residents complained that emergency services were slow to arrive to poorer southern neighborhoods of the city, and that wealthier districts appeared prioritized.

Disaster relief is sensitive for politicians in Mexico after the government’s widely panned response to the 1985 quake caused upheaval, which some credited with weakening the one-party rule of the Institutional Revolutionary Party (PRI).

A house destroyed by an earthquake is seen in Jojutla de Juarez, Mexico September 21, 2017. REUTERS/Edgard Garrido

ANGER AT NAVY AND MEDIA

After more than a day of wall-to-wall television coverage of the search for a girl in the rubble of the Enrique Rebsamen school, the Navy changed its version of events and said all pupils were now accounted for.

Since Wednesday, rescue workers told leading broadcaster Televisa that a schoolgirl was trapped in the rubble, a version confirmed by the admiral in charge of the rescue effort at the school, who on Thursday said the information came from the International Red Cross.

Senior Navy official Angel Enrique Sarmiento said he believed one adult was still alive under the rubble of the school, but search operations were suspended in the afternoon because of fears of further collapse.

The search for the girl, whom some local media outlets named “Frida Sofia,” captured hearts in a nation desperate for good news. As it became clear that the trapped person was not a child, there was an outpouring of anger on social media directed at broadcaster Televisa and the Navy for raising hopes.

Eleven other children were rescued from the same school, where students are aged roughly 6 to 15, the Navy said, adding that 19 children and six adults there were killed.

The body of a woman was pulled out on Thursday morning.

The Taiwanese Ministry of Foreign Affairs confirmed five nationals were trapped in a collapsed clothing factory in the Obrera neighborhood. Volunteers cutting through debris at the factory, which had been combed by rescue dogs, heard signs of life from a car.

Rescue worker Amaury Perez said, “We shouted, ‘If you are inside the vehicle, please knock three times.’ He knocked three times.”

Crews from Panama, El Salvador, the United States and Israel joined the search, using dogs, cameras, motion detectors and heat-seeking equipment to detect victims who may still be alive.

Armed soldiers guarded abandoned buildings at risk of collapse. Some 52 buildings collapsed in Mexico City alone and more in the surrounding states.

The extensive damage to many buildings, some of them relatively new, raised questions over construction standards which were supposed to have improved after a devastating 1985 quake.

The quake came on the anniversary of a 1985 earthquake that killed thousands and still resonates in Mexico. Annual Sept. 19 earthquake drills were being held a few hours before the nation got rocked once again.

Mexico was also recovering from another powerful quake less than two weeks ago that killed nearly 100 people in the south of the country.