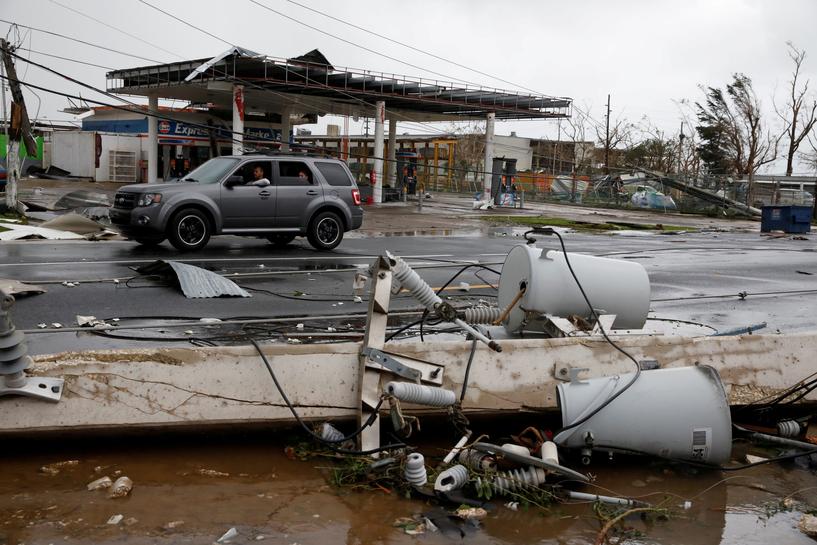 
SAN JUAN, Puerto Rico (Reuters) – Miguel Cruz awoke to the descent of Hurricane Maria on his home on Wednesday morning when the massive storm peeled off most of the roof, sent his belongings flying in all directions, but left intact an icon of Jesus hanging above his bed.

Cruz was one of thousands of Puerto Ricans picking through the wreckage left by Maria after the hurricane devastated basic services on the debt-laden U.S. territory, pitching most of its 3.4 million residents into darkness as night fell.

Crashing into Puerto Rico as a Category 4 storm on the five-step Saffir-Simpson scale, Maria flipped the tops off buildings, knocked out phones and electricity across the island and turned low-lying roads into swollen rivers awash with debris.

“I was terrified. I prayed to God that the door and windows wouldn’t open,” said Sonja Alvarez, 52, who spent 10 hours shut in a bedroom with her family while Maria raged outside. “But there came a point when I thought they would.”

Trees were torn apart, windows shattered and exposed homes turned inside out by Maria, which killed at least one man, who was struck by a piece of flying lumber. The storm also killed at least nine elsewhere in the Caribbean.

By 11 p.m. EDT (0300 GMT), Maria was drifting away from Puerto Rico. The slowing storm was blowing maximum sustained winds of 110 mph (175 kph) and was 55 miles (90 km) off the eastern tip of the Dominican Republic, the National Hurricane Center said.

The brutal winds left streets in the historic Old Town of the Puerto Rican capital, San Juan, strewn with rubble, from collapsed balconies to fallen lamp posts and dead birds.

Among the most dramatically damaged areas in the capital was La Perla, a small barrio nestled into the steep hill separating the stone walls of Old San Juan from the sea.

Once a notorious slum, La Perla’s image has brightened in recent years as it has become an artsier enclave with colorful homes providing the setting for the megahit “Despacito” by Puerto Rican singers Luis Fonsi and Daddy Yankee.

A man runs on the street next to debris and damaged cars after the area was hit by Hurricane Maria in Guayama, Puerto Rico September 20, 2017. REUTERS/Carlos Garcia Rawlins

However, the red, wooden home of area resident Cruz was reduced to a roofless jumble, with the front door hanging at right angles to the frame. Behind it, a painting of the Sacred Heart of Jesus looked out from a bare white wall.

“(Maria) has turned my house into a convertible. I can see the stars,” the 45-year-old self-employed laborer said wryly, after relating how he had fled to a bunker downstairs with his pit-bull, Estrella. “I‘m sort of used to these things,” Cruz added. “But this was tough.”

Down the slope from his home stood the shattered hulk of a concrete and steel garage with five cars trapped under the roof and sidewall that gave way under Maria’s battering.

Beyond his home, near the stone walls of the 500-year-old city, a cooker, a fridge and a toilet stood exposed atop another wooden house with views of the Caribbean.

“There used to be another floor,” said Angela Torres, 32, explaining that the rest of the kitchen, two bedrooms and living room had been stripped from the building by Maria.

After the rooms flew off, Torres, who had hunkered down on Tuesday night with her 87-year-old grandmother one floor below, learnt that Maria had knocked down one wall and the balcony of her own home a few miles away.

“I almost died when they sent me the photos,” she said. “But I haven’t been able to go yet because you can’t get out.”

Many in the capital left their coastal homes for refuge elsewhere, filling hotels across the city. Some returned to find their flats ruined by Maria, battered and full of water.

Gingerly entering her sodden fifth-storey flat in the heart of Old San Juan, Aida Pietri was suddenly gripped by panic as the battered door to her rooftop terrace slammed open and shut in the wind and a bird flew through it.

“Where are my daughter’s ashes?” she said, rummaging through the scattered cushions, plants and papers. Eventually her eyes alighted on a metal box, and she found them, undamaged.

NASA human spaceflight chief resigns ahead of launch
NASCAR back on track as F1 and IndyCar stuck in virtual world
For first time, scientists spot an alien planet as it is being formed
Sedrak Asatryan. “Business and the business environment are being dismantled”
The negative impact of government policy on investment. Sargis Grigoryan