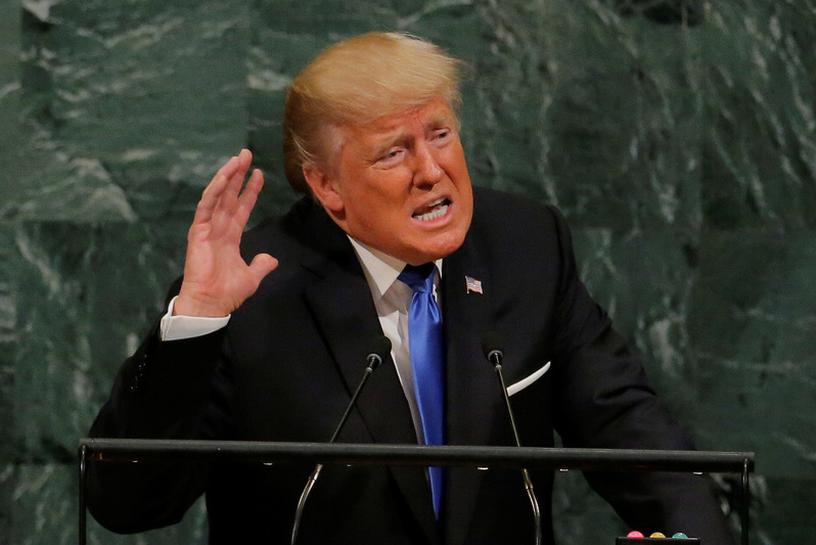 
NEW YORK (Reuters) – U.S. President Donald Trump said on Thursday the United States will add more sanctions against North Korea, while U.S. allies have called for enforcing existing international sanctions as the best way to get Pyongyang to give up its nuclear weapons program.

The sanctions are not expected to further target oil, a senior Trump administration official told Reuters.

Tensions have risen in recent weeks over North Korea’s nuclear and ballistic missile tests, despite intense pressure from world powers. The U.N. Security Council has unanimously imposed nine rounds of sanctions on North Korea since 2006, the latest earlier this month capping fuel supplies to the isolated state.

“We will be putting more sanctions on North Korea,” Trump said in response to a question at a meeting with Afghan President Ashraf Ghani in New York on the sidelines of the annual gathering of world leaders at the United Nations.

Trump said before the lunch that he and Moon were discussing trade issues and North Korea. “I think we’re making a lot of progress in a lot of ways,” Trump told reporters.

Trump warned North Korean leader Kim Jong Un in a speech to the U.N. General Assembly on Tuesday that the United States, if threatened, would “totally destroy” his country of 26 million people.

It was Trump’s most direct military threat to attack North Korea and his latest expression of concern about Pyongyang’s repeated launching of ballistic missiles over Japan and underground nuclear tests.

On Thursday South Korea’s Moon called for the North Korean nuclear crisis to be handled so as to maintain peace on the divided Korean peninsula.

Sanctions were needed to bring Pyongyang to the negotiating table and force it to give up its nuclear weapons, but Seoul was not seeking North Korea’s collapse, Moon said.

“All of our endeavors are to prevent war from breaking out and maintain peace,” Moon said in his speech, adding that Pyongyang’s nuclear issue “needs to be managed stably so that tensions will not become overly intensified and accidental military clashes will not destroy peace.”

Moon, a former human rights activist whom Trump has accused of appeasement toward North Korea, said: “We will not seek unification by absorption or artificial means. If North Korea makes a decision even now to stand on the right side of history, we are ready to assist North Korea together with the international community.”

Moon said all countries must strictly adhere to U.N. sanctions on North Korea and impose tougher steps in the event of new provocations by Pyongyang.

U.S. Treasury Secretary Steven Mnuchin will hold a news briefing at 3 p.m. (1900 GMT) in which he is expected to discuss the Trump administration’s sanctions announcement.

In Geneva, North Korea told a U.N. rights panel that international sanctions would endanger the survival of North Korean children.

South Korea approved a plan on Thursday to send $8 million worth of aid to North Korea, as China warned the crisis on the Korean peninsula was getting more serious by the day.

The last time the South had sent aid to the North was in December 2015 through the United Nations Population Fund (UNFPA) under former President Park Geun-hye.

North Korea conducted its sixth and largest nuclear test on Sept. 3 and has launched numerous missiles this year, including two intercontinental ballistic missiles and two other rockets that flew over Japan.

The United States and South Korea are technically still at war with North Korea because the 1950-53 Korean conflict ended with a truce and not a peace treaty. The North accuses the United States, which has 28,500 troops in South Korea, of planning to invade and regularly threatens to destroy it and its Asian allies.

NASA human spaceflight chief resigns ahead of launch
NASCAR back on track as F1 and IndyCar stuck in virtual world
Gagik Khachatryan was deprived of the constitutional right to healthcare. A report was filed about the crime
The negative impact of government policy on investment. Sargis Grigoryan
Coronavirus vaccine safe in early trial, hydroxychloroquine may increase death risk