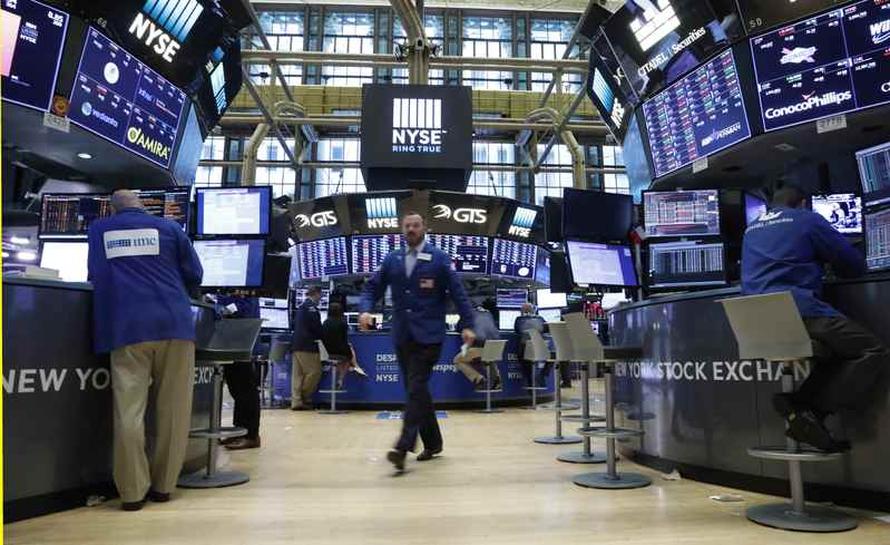 
(Reuters) – The three major U.S. indexes were trading lower on Thursday, scaling back from their record levels, weighed down by Apple and the Federal Reserve’s indication to raise interest rates for third time despite low inflation.

Shares of Apple (AAPL.O) fell 1.3 percent and was on track to post its biggest two-day decline since June. The stock was the biggest drag on the three major indexes.

Investors were also assessing the likely impact of the Fed’s decision to start ending monetary stimulus by reducing its approximately $4.2 trillion in holdings of U.S. Treasury bonds and mortgage-backed securities from October.

While the central bank left rates unchanged, it cited low unemployment, growth in business investment and an economic expansion that has been moderate but durable this year to build its case for another rate hike in 2017.

Interest rate futures are now pricing in about a 70 percent chance of a December hike, according to CME’s FedWatch tool, up from above 50 percent prior to the Fed meeting.

Fed Chair Janet Yellen said the fall in inflation this year remained a mystery, adding that the central bank was ready to change the interest rate outlook if needed.

“Today’s movement is most likely a give back as people digest the Fed statement and press conference,” said Michael Dowdall, investment strategist at BMO Global Asset Management.

“Clearly the Fed doesn’t have answers on the 2017 low inflation weakness but they’re still very sensitive to falling behind the curve so they want to stay in front of the inflation curve.”

Five of the 11 major S&P sectors were lower, with the consumer staples index’s .SPLRCS 0.74 percent fall leading the decliners.

Shares of Nvidia (NVDA.O) pared losses to trade down 3.4 percent after GlobalFoundries, which fabricates chips for Advanced Micro Devices (AMD.O), said Tesla (TSLA.O) had not committed to working with the company to develop its own artificial intelligence chip for self-driving cars.

Advanced Micro reversed course to trade down 2.9 percent and Tesla was off 1.6 percent.

U.S. stocks have continued to climb this year, with the S&P up about 12 percent so far, helped by strong corporate profits and optimism that U.S. President Donald Trump will cut taxes for businesses.

Valuations are stretched with the S&P trading near 17.6 times expected earnings, compared to its 10-year average of 14.3, according to Thomson Reuters Datastream.