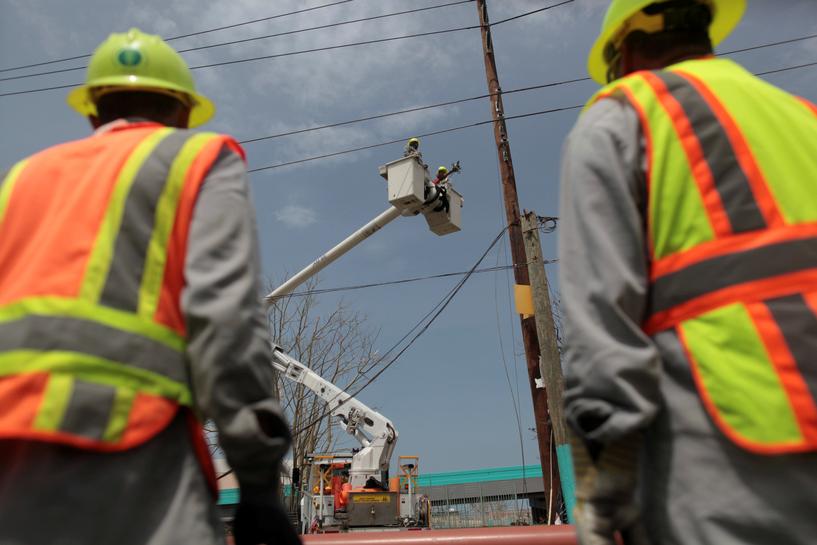 
NEW YORK (Reuters) – Efforts to restore electricity to Puerto Rico nearly six weeks after Hurricane Maria are shifting as the island’s utility and its regulators, along with U.S. authorities, removed a key contractor and moved to triple the funding of another.

The U.S. Army Corps of Engineers, which is leading the federal power restoration effort, said it plans to boost the size of a key contract awarded to Fluor Corp by $600 million, to $840 million, according to a government filing.

The Army Corps said it was modifying the contract to ensure “continued execution of the critical repair and restoration of the electric power grid in Puerto Rico.”

It comes a day after Puerto Rican Governor Ricardo Rossello and the Puerto Rico Electric Power Authority (PREPA) said they would cancel a $300 million contract with Whitefish Energy Holdings, after an uproar over the deal’s provisions and the tiny Montana company’s lack of experience with projects of such a large size.

Fluor, which declined comment, was already in the process of bringing in people to help restore transmission and distribution of power to the U.S. territory. Hurricane Maria knocked out power to all 3.4 million residents of Puerto Rico, and only about 30 percent of power has been restored nearly six weeks later.

The Army Corps’ action on Monday signals that Fluor is now the primary contractor on Puerto Rico. The Army Corps awarded the original $240 million Fluor contract. The more controversial Whitefish contract was handled directly with PREPA.

The Whitefish deal came under fire after it was revealed last week that the terms were obtained without a competitive public bidding process. Residents, local officials and U.S. federal authorities all criticized the arrangement.

Conflict over who should lead the process of restoration and oversee PREPA has hampered efforts. PREPA, the island’s bankrupt power utility, and the governor have argued that the utility should maintain control, while a fiscal control board created by U.S. Congress last year to restructure the island’s finances has also jockeyed for control.

“PREPA and the governor of Puerto Rico and the administration here need to make a decision on who is in charge of PREPA,” said Ariel Horowitz of Synapse Energy Economics, a consultant to Puerto Rico’s energy regulator.

Puerto Rico’s energy commission, a small regulatory board tasked with overseeing PREPA, has the option of assigning an independent adviser to monitor progress in restoring the grid, but has not done so yet.

Currently, there are about 400 subcontracting crews on the island working to bring back power. Rossello said he wants to have 1,000 crews by Nov. 8, leaning on so-called mutual aid from utilities in New York and Florida, which have crews on the island.

Getting assistance from other utilities, which usually help one another after storms, may continue to be complicated by Puerto Rico’s isolation and lack of investment in its system.

A private sector source, who could not be named, said the transition from Whitefish, should it be handled smoothly, will hopefully accelerate the restoration of power. He said PREPA‘S goal of restoring 95 percent of power by mid-December – a full three months after the hurricane – is slow for a typical utility.

PREPA did not respond to a request for comment.

Whitefish said it has completed significant work on two major transmission lines that crossed over the mountains of Puerto Rico. A person familiar with PREPA’s operations said on Monday that Whitefish would complete work on critical lines despite the cancellation of the contract.

Several other utilities are on the island, as well as private contractors that include Southern Co’s PowerSecure unit and Fluor.

An Army Corps spokesman said the Corps is not currently planning on hiring those reporting to Whitefish, but the subcontractors – Fluor and PowerSecure – might. Officials at Fluor and Southern did not comment on that possibility.

JEA, the municipal utility for Jacksonville, Florida, said it would keep its crew of about 40 people on the island, even if it no longer reports to Whitefish.

Why the environment matters and how the EU helps the Eastern partner countries to protect it
Millipede from Scotland is world's oldest-known land animal
Tyson the alpaca takes heavyweight role in search for coronavirus vaccine
SpaceX, NASA to try again for landmark launch of two astronauts from Florida
Hides that reveal: DNA helps scholars divine Dead Sea Scrolls