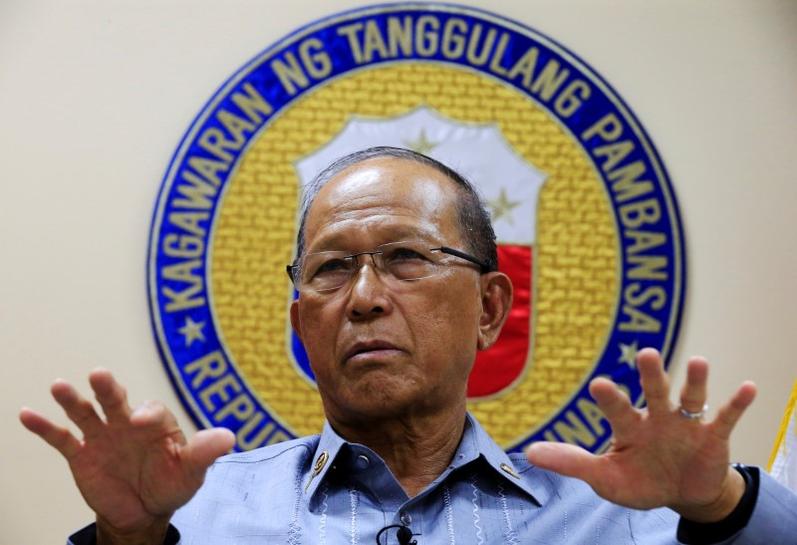 
MANILA (Reuters) – China and the Philippines will negotiate a military protocol to avoid maritime “miscalculations”, Manila’s defense minister said on Wednesday, following a brief standoff near a Philippine-occupied island in a disputed part of the South China Sea.

Delfin Lorenzana said the Philippines tried to put up makeshift structures on a sand bar about 4 km (2.5 miles) off Thitu island in the Spratly archipelago in August, but China objected and sent ships to the area.

President Rodrigo Duterte sought to defuse tensions by ordering troops to pull out. Construction was stopped.

“We intend to sit down with China to draft and agree on a protocol to resolve immediately any incident,” he said, adding he hoped talks could start this year.

”We hope to avoid any miscalculations in the disputed areas so we need the protocol to act on any problems because we cannot wait for higher authorities to decide.

“Anything can happen anytime, so we want commanders on the ground to decide to prevent violence.”

China claims almost the entire South China Sea, a strategic waterway where about $3 trillion worth of sea-borne goods pass every year. Brunei, Malaysia, the Philippines, Taiwan and Vietnam also have competing claims.

China-Philippines relations have often been frosty over maritime disputes, but ties have warmed under Duterte, who prefers to not provoke Beijing and wants to tap it for loans and investment.

Lorenzana said marines were sent to a sand bar to build shelter structures made of light materials for Filipino families and fishermen. There were also Chinese fishermen on the sand bar, about 500 square meters large, he said.

“China complained because the Philippines was occupying new features, which it said was a violation of a bilateral agreement,” Lorenzana added.

“We pulled out and no structures were built there but both sides agreed there would be no new occupation.”

The Philippines has pressed ahead with $25 million of upgrades to Thitu island. A small community of Filipinos has lived there since the 1970s, ostensibly to prop up the country’s claim, although conditions are basic compared to those enjoyed by Vietnamese and Chinese on other islands in the Spratly chain.

The Philippines has defended the upgrades, saying other countries have long been doing the same. China has rapidly built small cities on nearby artificial islands and installed missile systems, radars and aircraft hangars on three of them.