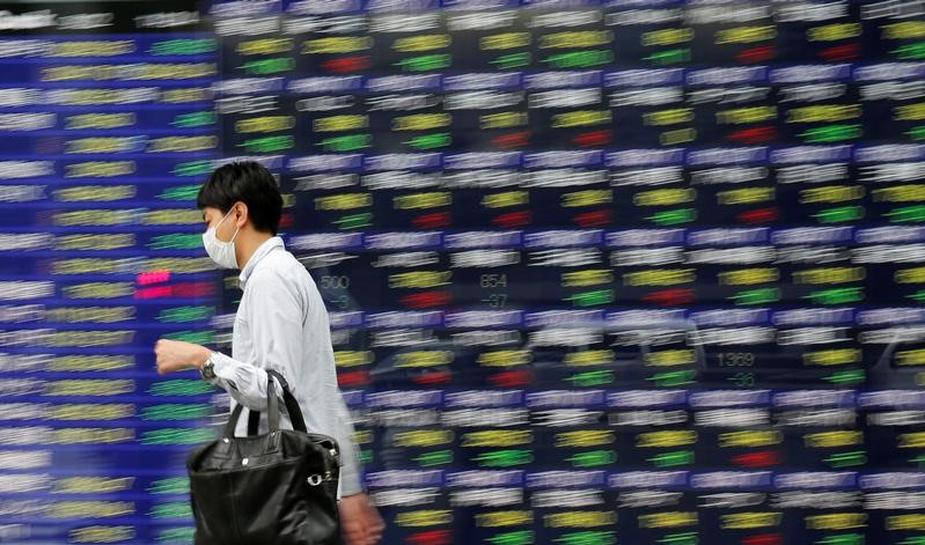 
SYDNEY (Reuters) – Asian stocks wobbled on Tuesday as investors awaited developments in U.S. tax reform efforts, while contemplating if a marked flattening in the U.S. yield curve might ultimately be a harbinger of an economic slowdown there.

A man walks past an electronic stock quotation board outside a brokerage in Tokyo, Japan, September 22, 2017. REUTERS/Toru Hanai

Japan’s Nikkei .N225 was choppy, down 0.1 percent to add to four sessions of losses.

Investors were waiting for any signs of compromise on U.S. tax policy after U.S. Senate Republicans on Thursday unveiled a plan that would cut corporate taxes a year later than a rival House of Representatives’ bill.

In Asia, the highlight will be Chinese data on industrial output, retail sales and urban investment, while the United States releases its own retail sales figures later in the day.

Also on the menu are no fewer than 13 central bank speakers, including the heads of the U.S., European, British and Japanese central banks.

On Wall Street, a sharp drop in General Electric shares was offset by gains in high dividend-paying sectors including consumer staples and utilities.

General Electric (GE.N) slashed its dividend by 50 percent and cut its profit forecast while unveiling a plan that narrowed its focus on aviation, power and healthcare.

Currency markets were mostly quiet, with the dollar barely changed against a basket of counterparts at 94.495 .DXY. The euro EUR= was up 0.03 percent at $1.1668.

Sterling hovered at $1.3113 GBP=, having fallen as far as $1.3063 on Monday amid concerns British Prime Minister Theresa May was losing her grip on power.

May’s blueprint for Britain’s departure from the EU faces a crucial test starting on Tuesday, when lawmakers try to win concessions on legislation to sever ties.

A rise in U.S. bond yields has generally made it more attractive to buy dollars with money borrowed in low-rate currencies like the yen and Swiss franc.

Figures out on Monday from the Commodity Futures Trading Commission showed the speculative net short position in the Japanese yen had blown out to the largest since January 2014 and in the Swiss franc to the biggest since December 2016.

Yields on Treasury two-year notes US2YT=RR hit a fresh nine-year high on Monday, shrinking the spread to 10-year paper to near its smallest since 2007.

The trend in part reflects market wagers the U.S. Federal Reserve’s plans to hike rates in December and two or three times next year will prove all too successful in restraining inflation by ultimately slowing the economy.

Tom Porcelli, chief U.S. economist at RBC Capital Markets, noted that a glance at history suggested a flatter, and particularly an inverted, yield curve was “compelling as an early warning sign” of recession.

“So even if we take the inverted curve as gospel, it suggests the expansion still has multiple years in it,” said Porcelli.

The online program “Step Towards Home” has launched
Judge Vahe Grigoryan: This Is a Brave and Historic Step
Nobody Has Recorded that My Tenure Ended: Judge Gyulumyan
International competition for the development of Gyumri Friendship Park architectural solutions kicks off in Armenia
Armenia Was Right: Co-chairs Supported Mammedyarov