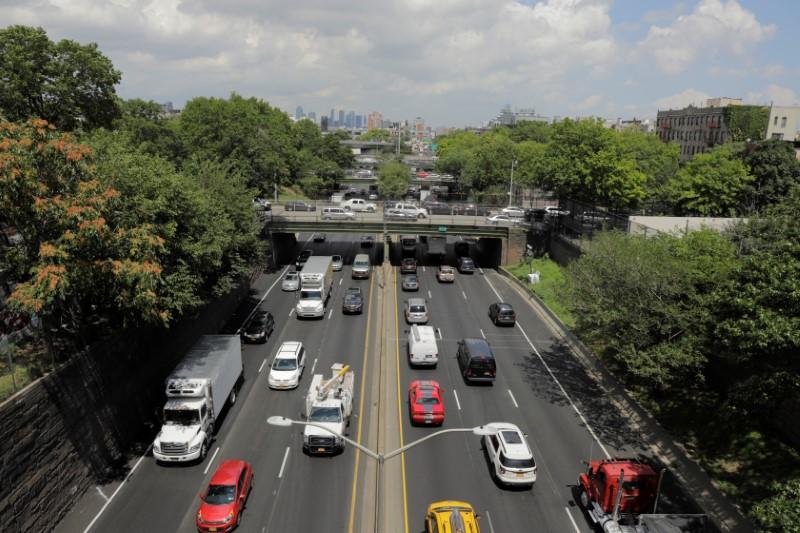 
DETROIT/WASHINGTON (Reuters) – California and 18 other U.S. states promised on Thursday to fight a Trump administration proposal to weaken fuel efficiency standards for cars and trucks and force states into line, arguing the United States has an obligation to protect the environment for future generations.

The administration billed the proposed rollback from Obama-era fuel efficiency standards as a way to help car companies and lower vehicle prices for consumers, but critics said the plan would accelerate climate change and increase fuel prices. By seeking to strip California of its authority to set its own strict vehicle emissions standards, the proposal also opens new questions about the limits of federal powers over states.

The 19 states, and Washington D.C, announced they would sue to halt the proposed rollback, touching off what will likely be a heated legal showdown that could last months and become a polarizing issue in elections in November.

“The Trump Administration has launched a brazen attack, no matter how it is cloaked, on our nation’s Clean Car Standards,” said California’s attorney general, Xavier Becerra. California “will use every legal tool at its disposal” to defend strict standards, he said in a statement.

Many U.S. states have adopted California’s emission rules, and together they make up about one third of the U.S. auto market – making the stakes for the autos industry enormous.

The administration said the proposed rollback would mean billions of dollars in regulatory savings for car manufacturers. But the industry is pushing for a negotiated settlement between states and the administration to lift uncertainty over the kinds of cars and trucks it will need to produce for the American market in the coming years.

The proposal to roll back anti-pollution efforts is in line with President Donald Trump’s decision last year to abandon the 2015 Paris Agreement, under which countries agreed to take steps to mitigate global warming.

It also dovetails with the Republican president’s broader effort to unwind green regulation, much of it enacted by Democratic former President Barack Obama’s administration, that he views as onerous to business.

The proposal from the U.S. Transportation Department and Environmental Protection Agency would freeze fuel efficiency standards at 2020 levels through 2026, and require dramatically fewer electric vehicles as more people continue to drive gasoline-powered vehicles.

The administration said the freeze would boost U.S. oil consumption by about 500,000 barrels of oil a day by the 2030s, and argued it would prevent up to 1,000 traffic fatalities per year by reducing the price of new vehicles and so prompting people to buy newer, safer vehicles more quickly.

Environmental groups criticized the assertion about reducing crash deaths, and said the proposal would drive up gasoline prices, increase asthma-inducing smog, and reverse one of the most significant steps Washington has taken to curb climate-changing greenhouse gas emissions.

“The clean car standards are already saving our families billions at the pump, supporting nearly 300,000 American jobs, and cleaning up dangerous tailpipe pollution,” said Rhea Suh, president of the Natural Resources Defense Council. “We need to speed up that progress, not slide backward.”

The administration must gather feedback on the proposal before it is finalized, a process that could take months and that could be further delayed by lawsuits.

The Transportation Department says the proposal would shrink regulatory costs for automakers by $319 billion through 2029, reducing by more than $60 billion what General Motors Co (GM.N), Ford Motor Co (F.N) and Fiat Chrysler Automobiles NV (FCHA.MI) each would have been expected to spend to comply with the Obama-era rules. Toyota Motor Corp (7203.T) would save $34 billion and Volkswagen AG (VOWG_p.DE) $20 billion.

General Motors said in a statement that it wants to work “with all parties to achieve one national 50-state program,” adding it was committed to “continually improving fuel economy and our commitment to an all-electric future.”

The administration also contends that hiking U.S. oil consumption by 2 to 3 percent over forecast levels would have a minimal impact on the environment, boosting global average temperature by just “3/1000th of a degree Celsius by 2100.” Trump’s decision to challenge California’s authority to regulate vehicle emissions upends decades of federal policy that allowed the most populous and richest U.S. state to combat air pollution that particularly afflicts Los Angeles.

“California will fight this stupidity in every conceivable way possible,” Governor Edmund Brown, a Democrat, said in a statement. The freeze would also eliminate $3 billion in estimated fines for automakers not meeting efficiency standards, but did not specify which automakers could avoid fines.

Democrats hope to make any rollback of the emissions rules a key part of November’s midterm elections, when they will try to regain control of one or both chambers of Congress. Republicans in states with links to the auto industry may counter that the administration is working to ensure automakers can make more profitable, larger vehicles, including fuel-thirsty pickups and SUVs.

Some middle ground might be possible. Acting EPA chief Andrew Wheeler said on Wednesday he would welcome a deal between the industry and states. Bill Wehrum, an assistant EPA administrator, told reporters on Thursday that many things had changed, including a drop in fuel prices, since the efficiency rules were last set six years ago. He said gas prices are “at historically low levels and that changes driving habits, that changes the kind of cars and trucks that people want to buy.”

Federal and California officials would soon meet about the proposal, Wehrum said, adding, “All of us want one national program. We are going to try to work it out.”

Becerra said California is “ready and willing” to talk with Trump administration regulators, but that previous talks have not been fruitful.